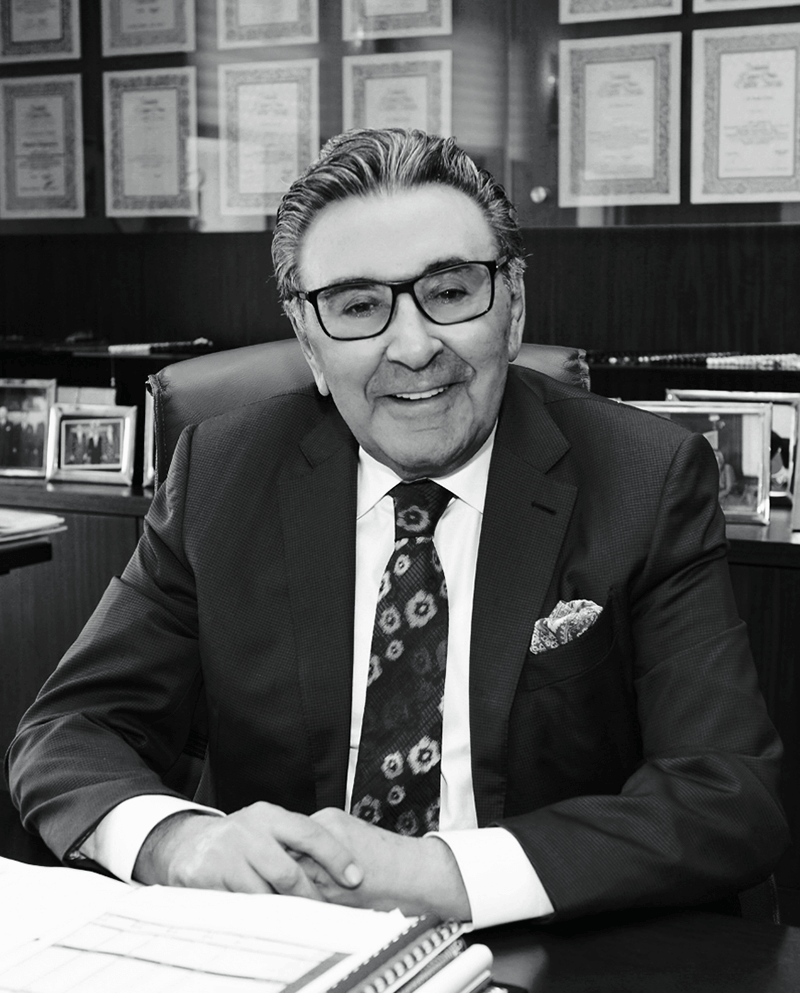 Message from the Honorary Chairman

2021 was a difficult and challenging year with many adversities for both our home country and the entire world.

The coronavirus pandemic persisted throughout the year with several new variants emerging, threatening the health and lives of all humanity. Case numbers in Turkey and worldwide increased dramatically, especially in the last months of 2021, making it necessary to further adapt our working life to the new reality.

Tremendous volatility in foreign exchange rates and uncertainty brought about by sharp increases posed another difficulty for Turkey’s economy. Despite the fall in the TL-USD exchange rate from TL 18 to TL 11 as a result of our government's action on December 20, the TL still recorded a major loss when looking at its full-year performance. A new uptrend is currently underway in foreign exchange rates, while Turkey’s inflation rate reached a record high of recent years – exceeding 36% in 2021 according to the Turkish Statistical Institute data. The 50% hike in the minimum wage at the end of the year came as a relief to many lower wage workers; however, that significant increase was largely offset by the substantial rise in electricity and natural gas prices that followed. While energy prices jumped across the world, food prices also rose at unprecedented rates. Many western countries became reacquainted with the specter of inflation this year.

All of us, and our government in particular, know that we are going through a very difficult economic period. It is our sincere wish that the newly announced unconventional economic model does succeed.

At Doğan Group, we believe in our country's strength and will to overcome all manner of difficulties. All of us must contribute to this effort by making sacrifices. We are continuing our investments without hesitation and making new investments whenever possible. Our investments in investment banking and the packaging industry are examples of these efforts.

I give thanks to all my colleagues for their committed efforts in the spirit of solidarity. I believe that Doğan Group, with its additional efforts in 2022, will make further contributions and add value to our country as it enters into a healthier stage of development.

I wish you all good health and well-being.
May love be with you all.

Aydın Doğan was born in 1936 in Kelkit, Gümüşhane to a prominent family of the region. He went to primary and junior high school in Kelkit and high school in Erzincan, before studying at İstanbul College for Economics and Commerce. At the college, he chaired the Student Association. In 1959, he was registered in Mecidiyeköy Tax Office, and started to trade automobiles, commercial vehicles and construction machinery. In 1961, he set up his first private company, which was active in wholesale trade until 1970.

In 1974, Aydın Doğan established a new company stepping into industry, and was elected to İstanbul Chamber of Commerce's Assembly and Board of Directors, and to Board of Directors of The Union of Chambers and Commodity Exchanges of Turkey in the following years.

After successful business initiatives in the fields of commerce, industry and real estate, he took over the daily Milliyet in 1979, thus stepping into the press. In 1994, he acquired the newspaper Hürriyet, thus further reinforcing his clout and continuing his ascent in the media industry. Furthermore, he has founded the newspapers Posta and Fanatik, which would go on to reach immense success. In TV broadcasting, he has created the brands Kanal D and CNN Türk, as well as Kanal D Romania. He has established companies that lead the pack in book publishing, music broadcasting, digital publishing and distribution such as Doğan Kitap, Doğan Burda Magazine Group and DMC. He has extended his achievements abroad and also established Turkey’s first media brands featuring international partners.

From 1986 until 1996, he served as the president of Turkish Union of Newspaper Owners. In 2004, he became the first Turk to be elected to the Board of Directors of the World Association of Newspapers (WAN).

While growing in the media industry, he has continued to invest in other areas as well. To his companies in the automotive, insurance and tourism industries, he has added banking and finance institutions. He has breathed new life into mass marketing with MilPA, and gone on to create one of Turkey's greatest brand in the retail industry: D&R. Doğan has later expanded his operations towards fuel retailing, mining and renewable energy.

He was granted State Medal of Distinguished Service in 1999 and Turkish Parliament’s Medal of Distinguished Service in 2007 In 2009, he received The Order of Merit of the Federal Republic of Germany for his contributions to the integration of German citizens of Turkish origin to German society through his efforts at Germany Integration Foundation, established through an initiative by the German Chancellor Angela Merkel, and of which Doğan is a founding member. He was awarded an honorary doctoral degree by Girne American University in 1999, followed by Ege University, Baku State University and Marmara University in 2000, 2001 and 2005 respectively.

For 60 years, the companies founded by Aydın Doğan under the umbrella of Doğan Holding have assumed pioneering and innovative roles in the business world, while fervently upholding the vital principles of honesty and transparency.

His vision has introduced groundbreaking changes in many fields from the media to marketing, from manufacturing to banking in Turkey. He has undertaken investments to create employment in Anatolia, where he was born and raised. In all his activities, he has aspired to national success as well as global prestige. While closely monitoring developments in Turkey and abroad, he has established strategic alliances with international groups across a vast region. In every business, he has adhered to a philosophy of quality and service that "holds the promise to the customer above all else". He has embraced a dynamic management approach open to change in his companies. He has upheld the values of gratitude, responsibility, transparency and collective achievement as integral parts of corporate culture. The corporate and ethical values embraced by the Holding have set an example to other groups in the business community.

In 1996, he has established Aydın Doğan Foundation, gathering under a single roof the wide array of services he had been providing to society; he has focused the Foundation's activities in the fields of education, culture, public health, scientific research, sports and economics. Across Turkey, he has built many schools, dormitories, gyms and parks named after him and his family members. The Foundation has been organizing for 25 years Aydın Doğan International Cartoon Competition, one of the most reputable award organizations in the world, and supporting students of communication through the Young Communicators' Competition. In addition, granted every year since 1996, Aydın Doğan Award has supported progress in various fields of culture and arts, ranging from literature to music, from architecture to social sciences.

Since 1977, Aydın Doğan has figured among the tax champions of the Istanbul Chamber of Commerce. He has transformed his company, which consisted of three people in 1961, into one of Turkey's foremost business offering employment to 20 thousand individuals through its subsidiaries, strategic partnerships and commercial agencies.

Having largely withdrawn from the media industry in 2018, Aydın Doğan currently guides the energy, fuel retailing, industry, automotive, finance, internet and digital publishing, tourism and entertainment, and real estate companies of Doğan Holding, of which he is the Honorary Chairperson, thus continuing to work and produce.

One of Turkey's foremost investors, Aydın Doğan is currently seeking new investment opportunities to add value to Turkey, together with her four daughters who represent the second generation in his companies.